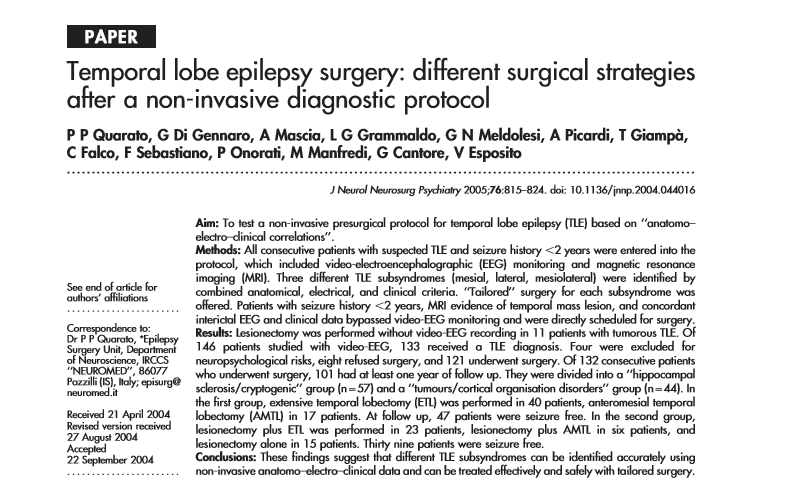 Results: Lesionectomy was performed without video-EEG recording in 11 patients with tumorous TLE. Of 146 patients studied with video-EEG, 133 received a TLE diagnosis. Four were excluded for neuropsychological risks, eight refused surgery, and 121 underwent surgery. Of 132 consecutive patients who underwent surgery, 101 had at least one year of follow up. They were divided into a ‘‘hippocampal sclerosis/cryptogenic’’ group (n=57) and a ‘‘tumours/cortical organisation disorders’’ group (n=44). In the first group, extensive temporal lobectomy (ETL) was performed in 40 patients, anteromesial temporal lobectomy (AMTL) in 17 patients. At follow up, 47 patients were seizure free. In the second group, lesionectomy plus ETL was performed in 23 patients, lesionectomy plus AMTL in six patients, and lesionectomy alone in 15 patients. Thirty nine patients were seizure free. Conclusions: These findings suggest that different TLE subsyndromes can be identified accurately using non-invasive anatomo–electro–clinical data and can be treated effectively and safely with tailored surgery.