Surgery after intracranial investigation with subdural electrodes in patients with drug-resistant focal epilepsy: outcome and complications. 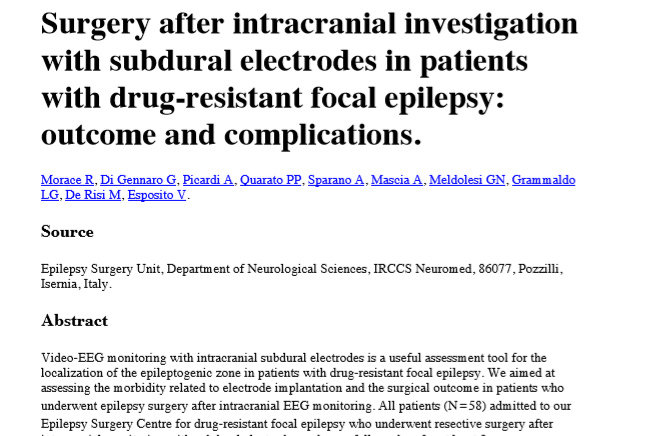 Video-EEG monitoring with intracranial subdural electrodes is a useful assessment tool for the
localization of the epileptogenic zone in patients with drug-resistant focal epilepsy. We aimed at
assessing the morbidity related to electrode implantation and the surgical outcome in patients who
underwent epilepsy surgery after intracranial EEG monitoring. All patients (N =58) admitted to our
Epilepsy Surgery Centre for drug-resistant focal epilepsy who underwent resective surgery after
intracranial monitoring with subdural electrodes and were followed up for at least 2 years were
included in the study. Their mean age was 30.4 years (range 8-60 years), 25 (43 %) were female, and
44 (76 %) had a preoperatively detected structural lesion. The mean duration of invasive recording was
2.3 days (range 1-14 days). Extraoperative ECoG allowed the identification of the epileptogenic focus
in all cases. The temporal lobe was involved in 21 (36 %) patients, whereas extratemporal foci were
identified in 24 (41 %) patients. Thirteen patients (23 %) had multilobar involvement. Functional brain
mapping was performed in 15 (26 %) patients. Transient complications related to electrode
implantation occurred in three patients. Among patients with evidence of lesion on preoperative MRI,
lesionectomy alone was performed in 12 cases (27 %), while it was combined with tailored cortical
resection in the remaining cases. Tailored cortical resection was also performed in patients without
evidence of lesion on MRI. After resective surgery, transient neurological deficits occurred in five
cases, while another patient experienced permanent lateral homonymous hemianopia. At the last
follow-up observation, 34 (57 %) patients were seizure-free (Engel class I). This study suggests that
invasive EEG recording with subdural electrodes may be useful and fairly safe for many candidates for
epilepsy surgery.