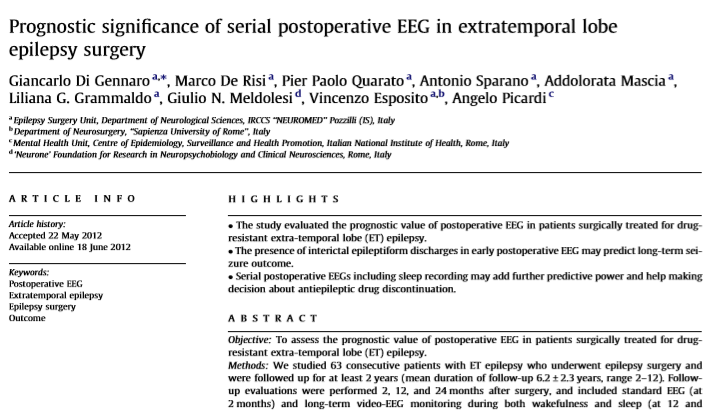 Methods: We studied 63 consecutive patients with ET epilepsy who underwent epilepsy surgery and were followed up for at least 2 years (mean duration of follow-up 6.2 ± 2.3 years, range 2–12). Follow-up evaluations were performed 2, 12, and 24 months after surgery, and included standard EEG (at 2 months) and long-term video-EEG monitoring during both wakefulness and sleep (at 12 and 24 months). Seizure outcome was determined at each follow-up evaluation, and then at yearly intervals. Patients who were in Engel Class I at the last contact were classified as having a good outcome.

Results: Seizure outcome was good in 39 patients (62%). The presence of interictal epileptiform discharges (IED) in postoperative EEG at each time point was found to be associated with poor outcome.

The strength of this association was greater for awake plus sleep recording as compared with awake recording alone. In a multiple regression model including all pre- and post-operative factors identified as predictors of outcome in univariate analysis, the presence of early (2 months after surgery) EEG epileptiform abnormalities was found to be independently associated with poor seizure outcome.