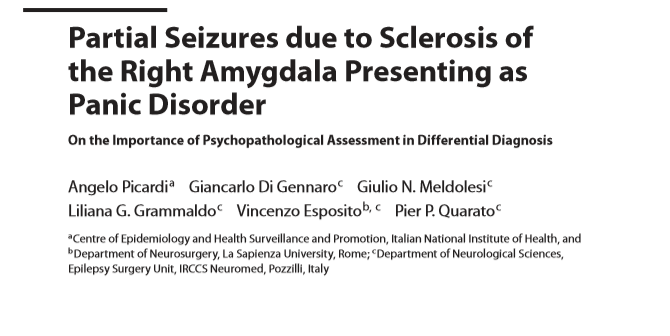 On the Importance of Psychopathological Assessment in Differential Diagnosis.

Abstract: The differential diagnosis between panic disorder and focal epilepsy may sometimes pose a serious challenge. We report the case of a 32-year-old woman who complained of paroxysmal episodes of acute anxiety that evaded diagnosis for 8 years. Standard EEGs and brain CT scan showed no clear pathologic findings. Antidepressants, support psychotherapy and several courses of antiepileptic drugs were not beneficial. She was referred to our centre for a comprehensive diagnostic assessment. Clinical and standardized personality assessment did not reveal the personality organization typically associated with proneness to develop phobic anxiety disorders. Also, agoraphobic avoidance was absent, and the patient’s main worries during the episodes involved negative social judgments rather than health. A brain MRI revealed a slightly increased signal at FLAIR images in the right amygdala. Video-EEG monitoring was decisive in establishing the diagnosis of drug-resistant right mesial temporal lobe epilepsy. Anteromesial temporal lobectomy was offered and successfully performed. Pathological examination of removed brain tissue revealed amygdalar sclerosis and mild hippocampal neuronal loss. At a 6-month follow-up visit, the paroxysmal episodes had completely disappeared. Depression, anxiety and quality of life were markedly improved. This case suggests that focal epilepsy should be considered in patients with paroxysmal episodes of anxiety, especially if dissociative symptoms and atypical clinical features for panic disorder are present, and if there is no satisfactory response to adequate trials of medication and psychotherapy within one year. A careful psychopathological analysis rather than a descriptive enumeration of symptoms is needed to bring these features to light. In such cases, even if routine EEGs or MRI are inconclusive and there is no response to antiepileptic drugs, it would be advisable to perform videoEEG monitoring to rule out partial seizures.