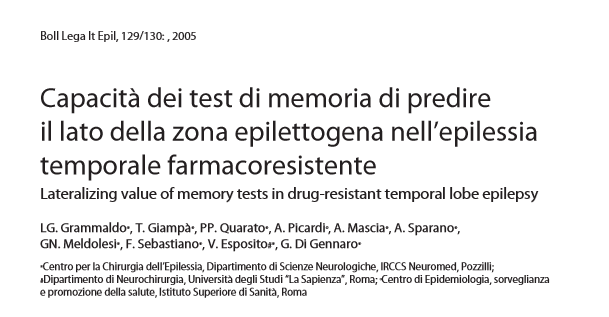 The lateralizing value of a neuropsychological battery including several memory tests on a large sample of consecutive patients with drug-resistant temporal lobe epilepsy (TLE) evaluated for epilepsy surgerywas tested. We studied 73 right-handed patients (56% males, mean age 35.3 ± 11.2 years, 49% left TLE) aged 16 years or older with normal IQ who underwent a preoperative neuropsychological assessment including several memory tests and were seizure-free after at least one year of follow-up. Forty-seven had TLE due to hippocampal sclerosis, while 26 had TLE secondary to tumors or other lesions. Receiver Operating Characteristic (ROC) analysis and discriminant function analysis were used to evaluate the lateralization value of selected tests and of the battery as a whole, respectively. In patients with TLE secondary to tumors or other lesions, no test showed significant lateralizing value. In patients with TLE due to hippocampal sclerosis, the immediate (p < .01) and delayed (p < .001) Rey Auditory Verbal Learning Test (RAVLT) displayed substantial discriminatory ability. The battery as a whole correctly classified 82% of patients with respect to side of epileptogenesis. Our findings suggest that a non-invasive, relatively short and unexpensive neuropsychological battery based on memory tests may profitably complement other well-established diagnostic procedures such as video-EEG or MRI, at least in patients with drug-resistant TLE due to hippocampal sclerosis.