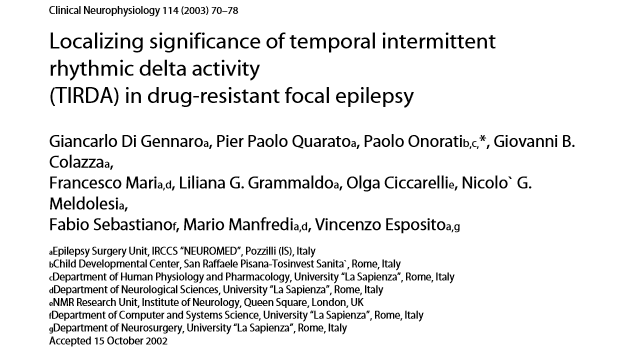 Objective: Temporal intermittent rhythmic delta activity (TIRDA) is an EEG pattern characterized by sinusoidal trains of activity, ranging from 1 to 3.5 Hz, and well localized over the temporal regions. It is considered to be an indicator of temporal lobe epilepsy (TLE), but full agreement between different authors has still not been reached. The aim of this study was therefore to assess the role of TIRDA in localizing the epileptogenic zone, which was estimated using anatomo-electro-clinical correlations obtained from non-invasive pre-surgical investigations, in a large group of patients affected by drug-resistant partial epilepsy.